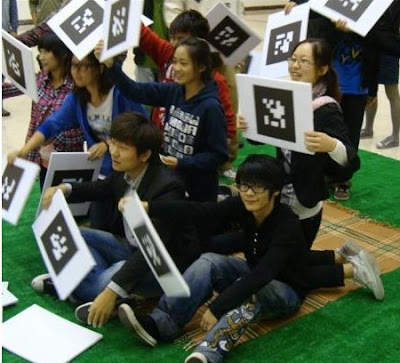 The above are participants in the Picnic In Arcadia event in Shanghai on 23/10/10 during the link up between China and Liverpool.

The Shanghai connection was facilitated by Charlotte Gould and Paul Sermon, University of Salford who are members of the Shang-Pool Arcadia Project.

Here is what Salford University said of the event:

A Liverpool Biennial event run by the Universities of Salford, Liverpool John Moores and Shanghai brought together people on opposite sides of the globe in a virtual world modelled on the newly regenerated Stanley Park.

The participants were captured by cameras which projected them onto the screen, and augmented reality allowed them to interact with surreal picnic items and animated characters from both cultures.

'Shang-Pool Picnic' combined the work of the University of Salford's Charlotte Gould and Paul Sermon to explore the concept of idyllic green spaces in the city for recreation, contemplation and meetings, with Liverpool's Victorian Stanley Park forming the virtual backdrop.

It built on the technology they used at the 2009 Glastonbury Festival where festival-goers appeared and interacted with each other inside a virtual 'picnic on the screen'.

Charlotte Gould of the School of Art & Design said: "Liverpool and Shanghai were brought that bit further together in cultural fusion. It's the first time these technologies have been used in this combination of across the globe telecommunications." University of Salford
Posted by Shang Pool Arcadia at 07:44

Email ThisBlogThis!Share to TwitterShare to FacebookShare to Pinterest
Labels: Picnic In Arcadia

Shang Pool Arcadia
This is a collaborative project established between Liverpool John Moores University, and the University of Shanghai. Drawing on expertise and research from both science and art faculties within these universities the project will take aspects of parks and urban spaces in Shanghai and Merseyside and create virtual and augmented Arcadia’s which explore the park as an idealised landscape.